Design a site like this with WordPress.com
Get started
Skip to content
being the best you can be Flowers for Algernon April 9, 2020April 9, 2020 3 Minutes

‘Flowers for Algernon’ by Daniel Keyes first appeared as a short story published in a science fiction magazine.  Keyes expanded his story into a full-length novel that was published in 1966. The novel won a Nebula Award for best novel of the year. The novel was adapted for the movie Charly released in 1968. 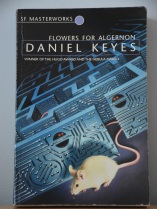 You may not have come across this book if you do not read Science Fiction. ‘Flowers for Algernon’ has  futuristic concepts  as its theme including  the science fiction favourite premise of Man playing God.  However, it is also a deeply moving book which explores how intelligence can affect a person’s humanity and their friendships as well as facing the loss of something very precious..

The story is told by Charlie Gordon, a man with an IQ of 68, who is chosen to be the human test subject in an experiment to increase intelligence. He agrees because all he has ever wanted is to learn, to be smart and not dumb. The experiment has proved successful in animals in particular the white mouse of the title, Algernon. The reader follows Charlie’s journey through a series of progress reports he writes whose clarity and perception increases after the surgery. Then Algernon regresses and Charlie, now more intelligent than the scientists who experimented on him, must face an uncertain future.

I have read ‘Flowers for Algernon’ a number of times over the years and have found new insights each time I return to it. I first read this book when I was in my early teens. I love science fiction and this was one of a number of classics recommended by a friend. I thought it an incredibly moving story, especially at the end. I enjoyed the narrative style of Charlie’s reports, which was different from any other ‘first person’ stories I had read. They accurately charted his journey simply through the changes of spelling and grammar. I remember that I liked Charlie and his teacher Miss Kinnion and thought the doctors arrogant. 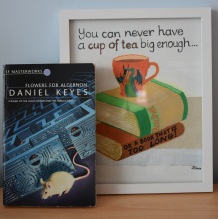 When I re-read the novel as an adult, I could better appreciate Daniel Keyes’ exploration of the effect Charlie’s intelligence had on his humanity and how he treats people and how others treat him. His greater intelligence enables him to discover that work mates he considered friends because he had fun with them were actually making fun at his expense. Charlie’s intelligence changes him because his emotional growth cannot keep pace with the rapid change in his intellect. I also empathised with Charlie’s fight to prove to the experimenters that he was not just a laboratory animal like Algernon but was a human being , even before his surgery.

Now when I read the novel I see in Charlie a reflection of my father who has dementia. Like Charlie at the end of the novel he knows he is losing something precious, in Dad’s case his memory. Some days, he knows what he has lost and that there is more loss to come and he rages against that. However, often there is a quiet acceptance and requests to do tasks he will no longer be able to perform like Charlie requesting flowers for Algernon. It has helped me understand my father’s frustration.

I will always enjoy this book. Some of its language is politically incorrect for this age but the concepts and questions it raises are still relevant today. Charlie is a genuinely sympathetic character even at his worst, his story is very moving and Daniel Keyes method of portraying his journey makes it fresh each time I revisit it.

Rachel is a semi-retired radiographer living in Buckinghamshire with her husband and a chicken. She enjoys singing in choirs, photography and crochet and spends far too much time reading and on the computer searching for answers to odd questions. This is her first post for Being the Best You Can Be.

If anyone else has read ‘Flowers for Algernon’ and wants to leave a comment please do so in the form below.

Published by being the best you can be

Bringing together all 4 blogs under the one name, here you will find travel posts, Alison's travel updates from her 40 countries in her 40s challenge, book reviews and authors' interviews which also reach out to all corners of the world and communities who don't have access to the internet as much as others may do. You'll also find features on ordinary people's lives in our sections 'Ordinary people living extraordinary lives' and more recently 'A Day in the life.... during lockdown'. Hope you enjoy! View all posts by being the best you can be